Val Head delves deep into her Christmas sack to find two very important deliverables. With animation forming such a crucial part of interaction and brand design in modern interfaces, you may not want to leave its implementation to chance.

Brought to you by Siftware. Is day-to-day support of your client’s website a distraction? Does it mean you have to take your phone and laptop on holiday with you? Get Managed Support For Web Applications. Keep the relationship, but just focus on the bits that you do best.


Our design process relies heavily on static mockups as deliverables and this makes it harder than it needs to be to incorporate UI animation in our designs. Talking through animation ideas and dancing out the details of those ideas can be fun; but it’s not always enough to really evaluate or invest in animated design solutions.

By including deliverables that encourage discussing animation throughout your design process, you can set yourself (and your team) up for creating meaningful UI animations that feel just as much a part of the design as your colour palette and typeface. You can get out of that “running out of time to add in the animation” trap by deliberately including animation in the early phases of your design process. This will give you both the space to treat animation as a design tool, and the room to iterate on UI animation ideas to come up with higher quality solutions. Two deliverables that can be especially useful for this are motion comps and animated interactive prototypes.

Motion comps (also called animatics or motion mock-ups) are usually video representation of UI animations. They are used to explore the details of how a particular animation might play out. And they’re most often made with timeline-based tools like Adobe After Effects, Adobe Animate, or Tumult Hype.

The most useful things about motion comps is how they allow designers and developers to share the work of creating animations. (Instead of pushing all the responsibility of animation on one group or the other.) For example, imagine you’re working on a design that has a content panel that can either be open or closed. You might create a mockup like the one below including the two different views: the closed state and the open state. If you’re working with only static deliverables, these two artboards might be exactly what you handoff to developers along with the instruction to animate between the two. 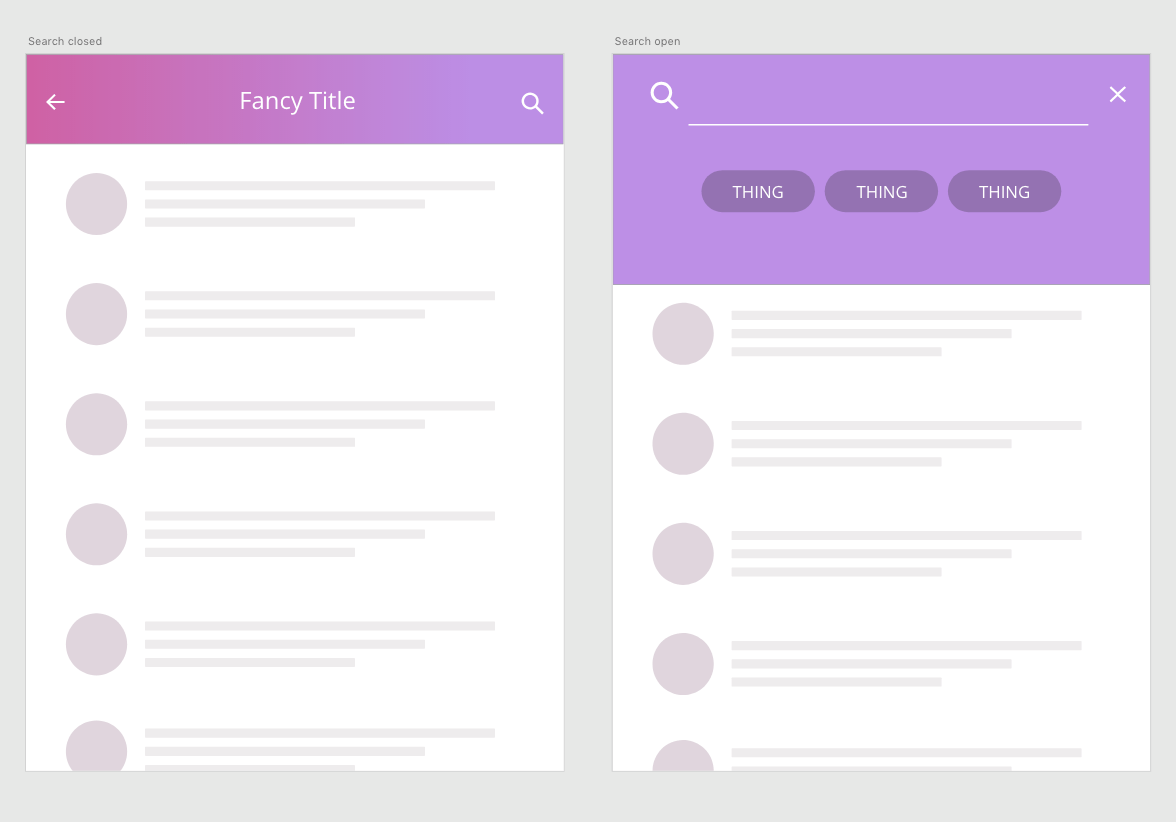 On the surface that seems pretty straight forward, but even with this relatively simple transition there’s a lot that those two artboards don’t address. There are seven things that change between the closed state and the open state. That’s seven things the developer building this out has to figure out how to move in and out of view, when, and in what order. And all of that is even before starting to write the code to make it work.

By providing only static comps, all the logic of the animation falls on the developer. This might go ok if she has the bandwidth and animation knowledge, but that’s making an awful lot of assumptions.

The motion comp can also be used to iterate on different possible animation approaches before any production code has to be committed too. Sharing the work and giving yourself time to explore animation ideas before you’re backed up again the deadline will lead to happier teammates and better design solutions.

When to use motion comps

I’m not a fan of making more deliverables just for the sake of having more things to make, so I find it helps to narrow down what question I’m trying answer before choosing which sort of deliverable to make to investigate.

Motion comps can be most helpful for answering questions like:

Motion comps are often used to handoff animation ideas from design to development. They can be super useful for this, but they’re even more useful when you include the details of the motion specs with them. (It’s difficult, if not impossible, to glean these details from playing back a video.)

More specifically, you’ll want to include:

In many cases you’ll have to collect these details up manually. But this isn’t necessarily something that that will take a lot of time. If you take note of them as you’re creating the motion comp, chances are most of these details will already be top of mind. (Also, if you use After Effects for your motion comps, the Inspector Spacetime plugin might be helpful for this task.)

Interactive prototypes are web or app-based, or displayed in a particular tool’s preview window to create a useable version of interactions that might end up in the end product. They’re often made with prototyping apps like Principle, Framer, or coded up in HTML, CSS and JS directly like the example below.

The biggest different between motion comps and animated prototypes is the interactivity. Prototypes can reposed to taps, drags or gestures, while motion comps can only play back in a linear fashion. Generally speaking, this makes prototypes a bit more of an effort to create, but they can also help you solve different problems. The interactive nature of prototypes can also make them useful for user testing to further evaluate potential solutions.

When to use prototypes

When it comes to testing out animation ideas, animated prototypes can be especially helpful in answering questions like these:

Prototypes can be used to investigate the same questions that motion comps do if you’re comfortable working in code or your prototyping tool of choice has capabilities to address high fidelity animation details. There are so many different prototyping tools out there at the moment, you’re sure to be able to find one that fits your needs.

As a quick side note: If you’re worried that your coding skills might not be up to par to prototype in code, know that prototype code doesn’t have to be production quality code. Animated prototypes’ main concern is working out the animation details. Once you’ve arrived at a combination of animations that works, the animation specifics can be extracted or the prototype can be refactored for production.

Both motion comps and prototypes can be extremely useful in the design process and you can use whichever one (or ones) that best fits your team’s style. The key thing that both offer is a way to make animation ideas visible and sharable. When you and your teammate are both looking at the same deliverable, you can be confident you’re talking about the same thing and discuss its pros and cons more easily than just describing the idea verbally.

Motion comps tend to be more useful earlier in the design process when you want to focus on the motion without worrying about the underlying structure or code yet. Motion comps also be great when you want to try something completely new. Some folks prefer motion comps because the tools for making them feel more familiar to them which means they can work faster.

Prototypes are most useful for animations that rely heavily on interaction. (Getting the timing right for interactions can be tough without the interaction part sometimes.) Prototypes can also be helpful to investigate and optimize performance if that’s a specific concern.

Give them a try

Whichever deliverables you choose to highlight your animation decisions, including them in your design reviews, critiques, or other design discussions will help you make better UI animation choices. More discussion around UI animation ideas during the design phase means greater buy-in, more room for iteration, and higher quality UI animations in your designs. Why not give them a try for your next project?

Val is a designer and web animation consultant with a talent for getting designers and developers alike excited about the power of animation. She is the author of The Pocket Guide to CSS Animations and the upcoming Designing Interface Animations.

She curates the UI Animation Newsletter, hosts the All The Right Moves screencast, and co-hosts the Motion and Meaning podcast. Val leads workshops at companies and conferences around the world on motion design for the web and loves every minute of it.