How Dalton Maag created a custom font family for the BBC

Lukas Paltram, creative director at Dalton Maag, explains the process behind creating a custom typeface for the BBC – and offers some advice for clients considering whether to invest in a new font

Creating a bespoke typeface for any client is a complex task. It is even more so when that client is the BBC – an organisation with multiple websites and broadcast channels and a global audience of millions as well as a remit to make its output accessible for all.

Dalton Maag was asked to create a font for the BBC early last year and this month unveiled BBC Reith: a Humanist font family made up of several styles and weights.

BBC Reith was unveiled on BBC Sport this month to coincide with a brand refresh carried out by Studio Output and BBC Creative and will be rolled out across all of the BBC’s channels and platforms over the next year.

The project was led by David Bailey, creative director of GEL (Global Experience Language) and UX&D at the BBC. Lukas Paltram, creative director at Dalton Maag, says it was a collaborative process involving stakeholders from across the BBC. 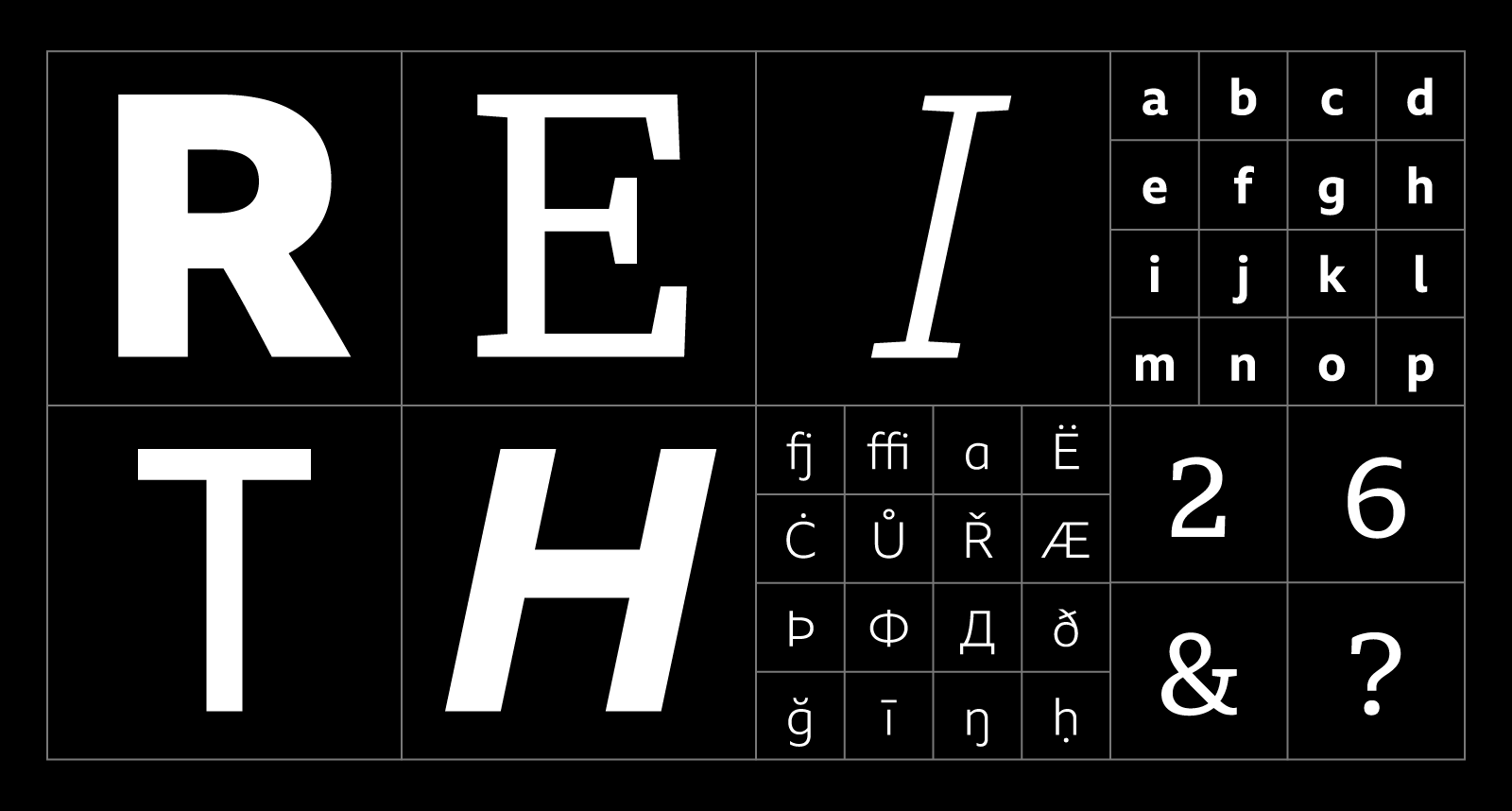 The aim was to create a single type family that could work across all of the BBC’s output. The BBC was previously using Gill Sans as its master brand typeface and Neue Helvetica and Arial for digital content.

“[David’s] ambition was to introduce a new font, a new typeface family which could bring more consistency and clarity across all of their media,” explains Paltram.

Gill Sans is an iconic typeface but Dalton Maag says that certain design features (such as a relatively small x height and some complex character designs) made it unsuitable for use at small sizes on digital screens. The BBC needed a font family that would work equally well in mobile apps as it would on TV or in print: “The BBC has to make its content accessible to everyone equally, so legibility was a massive factor,” says Paltram. 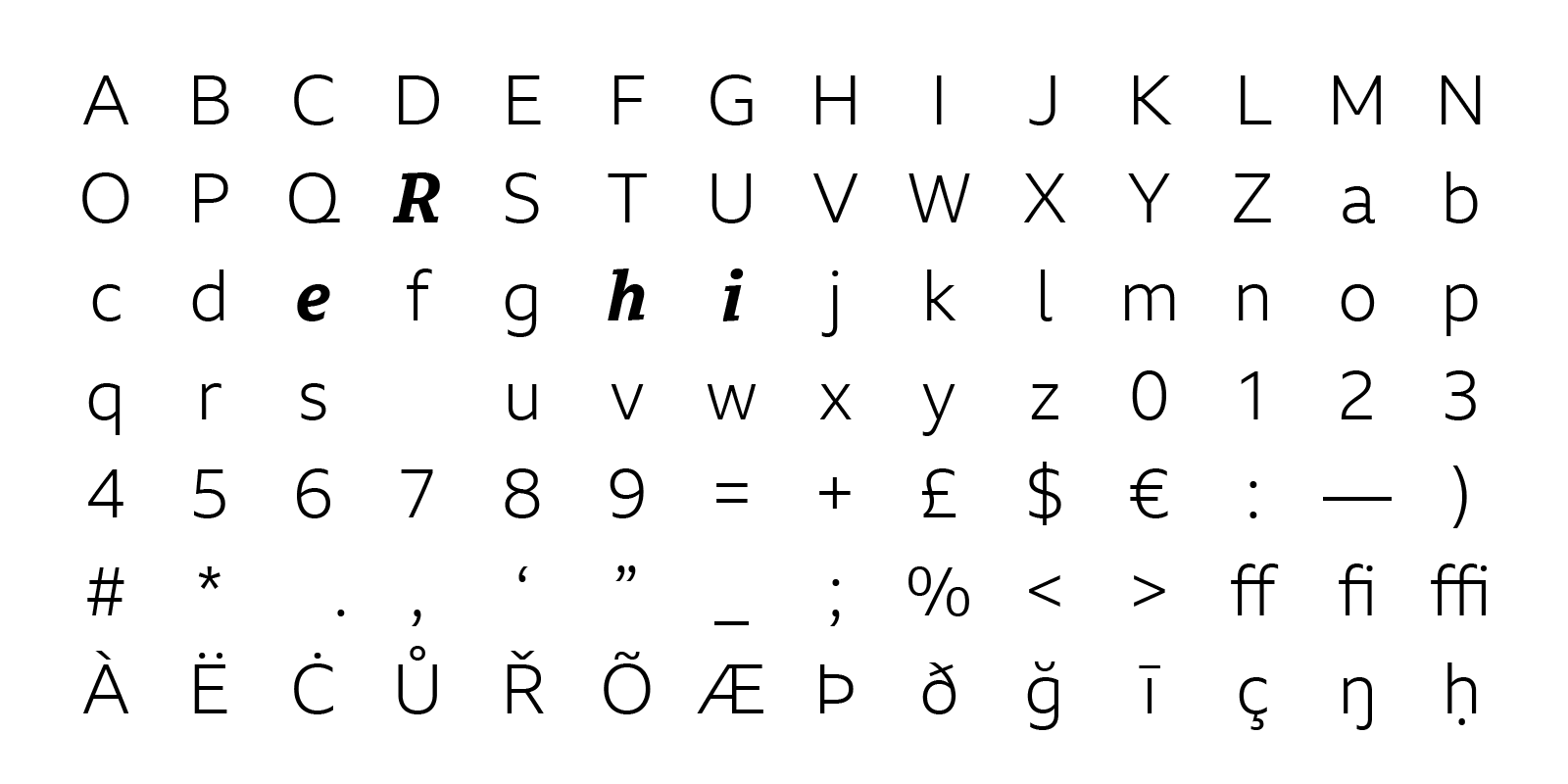 BBC Reith provides a nod to Gill Sans and iconic British type design but a number of features are designed to make it easier to read on digital screens. These include “distinctive ascenders”, a larger x-height, “sharp connections between curved strokes and straight” and relatively low contrast (the difference between thick and thin strokes) as well as open counters and apertures that afford “more breathing space” in between letters. (See here for an explanation of terms).

The project began with speaking to teams from across the BBC to find out what a typeface would need to do for them. “We held a couple of workshops at our studios and at the BBC and worked with different teams to understand their requirements, what things don’t work currently with the designs that they are using, what things they want to achieve [with the new typeface], and what’s important for them in terms of functionality and expression,” says Paltram.

Dalton Maag also researched the BBC’s visual identity and typographic heritage. “With the BBC being an iconic British institution we had to [have] an understanding of heritage and tradition,” explains Paltram. “You have to be aware of where you’re coming from – what designs have been chosen in the past, why they have been successful and why people like them – but at the same time take a step forward, and the BBC were very open to that.”

After establishing the functional and aesthetic requirements of the typeface, Dalton Maag assembled a varied team of designers, engineers and developers from different countries and asked them to give their interpretation of the brief. 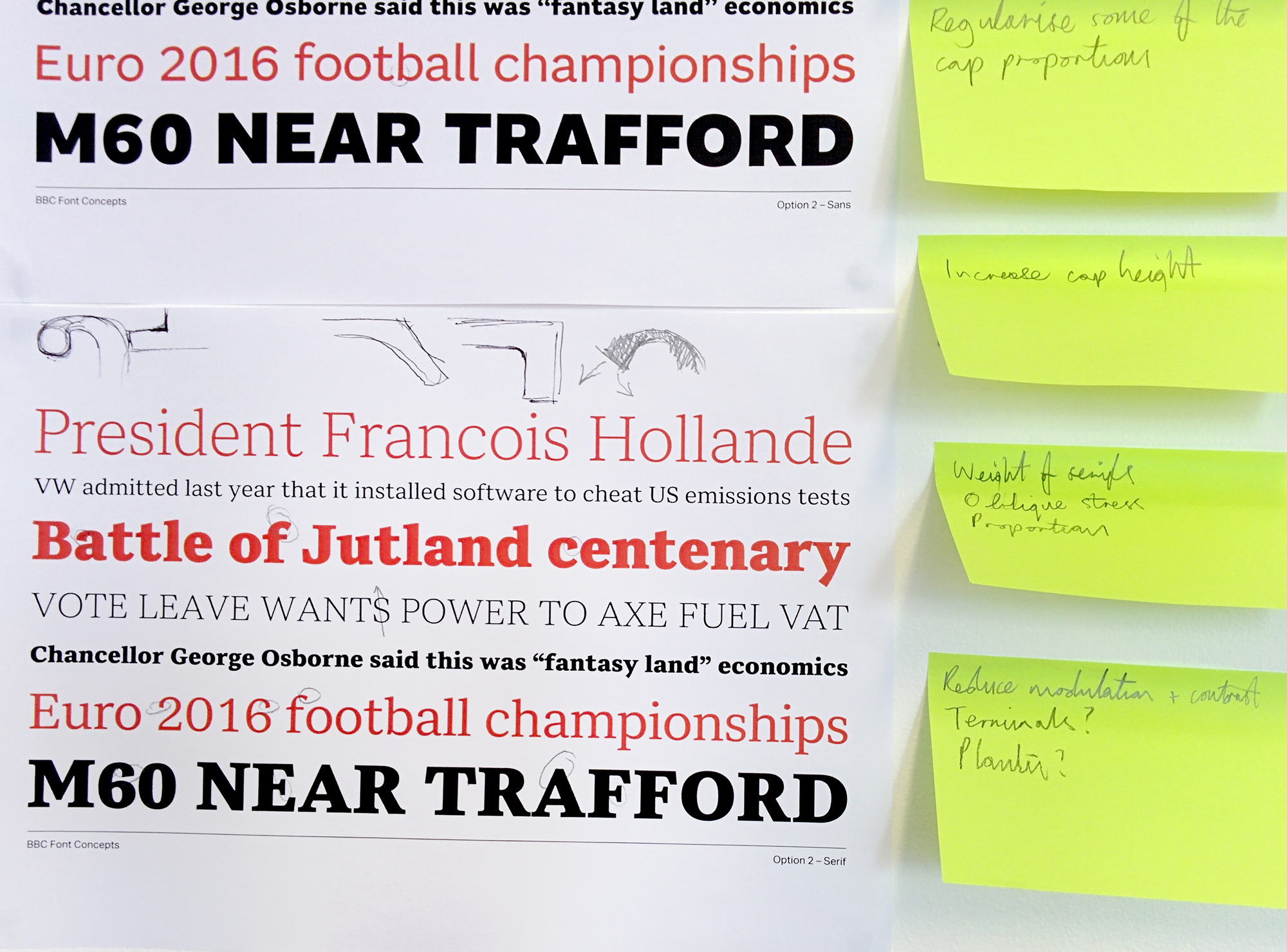 Dalton Maag presented several initial concepts to the BBC and worked with the organisation to select a couple of possible options. At this stage, the team created just a handful of characters based on each concept. This allowed them to establish the look and feel and key features of each possible design route without spending too much time on creating a full set of characters.

“The design has to be extremely considered, so we have to look at small character sets and identify the most important design features,” explains Paltram.

“In the beginning [it takes time] to hit the right direction. There’s a lot of work to redo and undo and go back to because at the end of the day, type design is a very systematic kind of design – all of the elements have to work together and it’s hard to change fundamental design positions later on in the process – so we start with small characters to get as much as possible into that first step of the ideation process.” 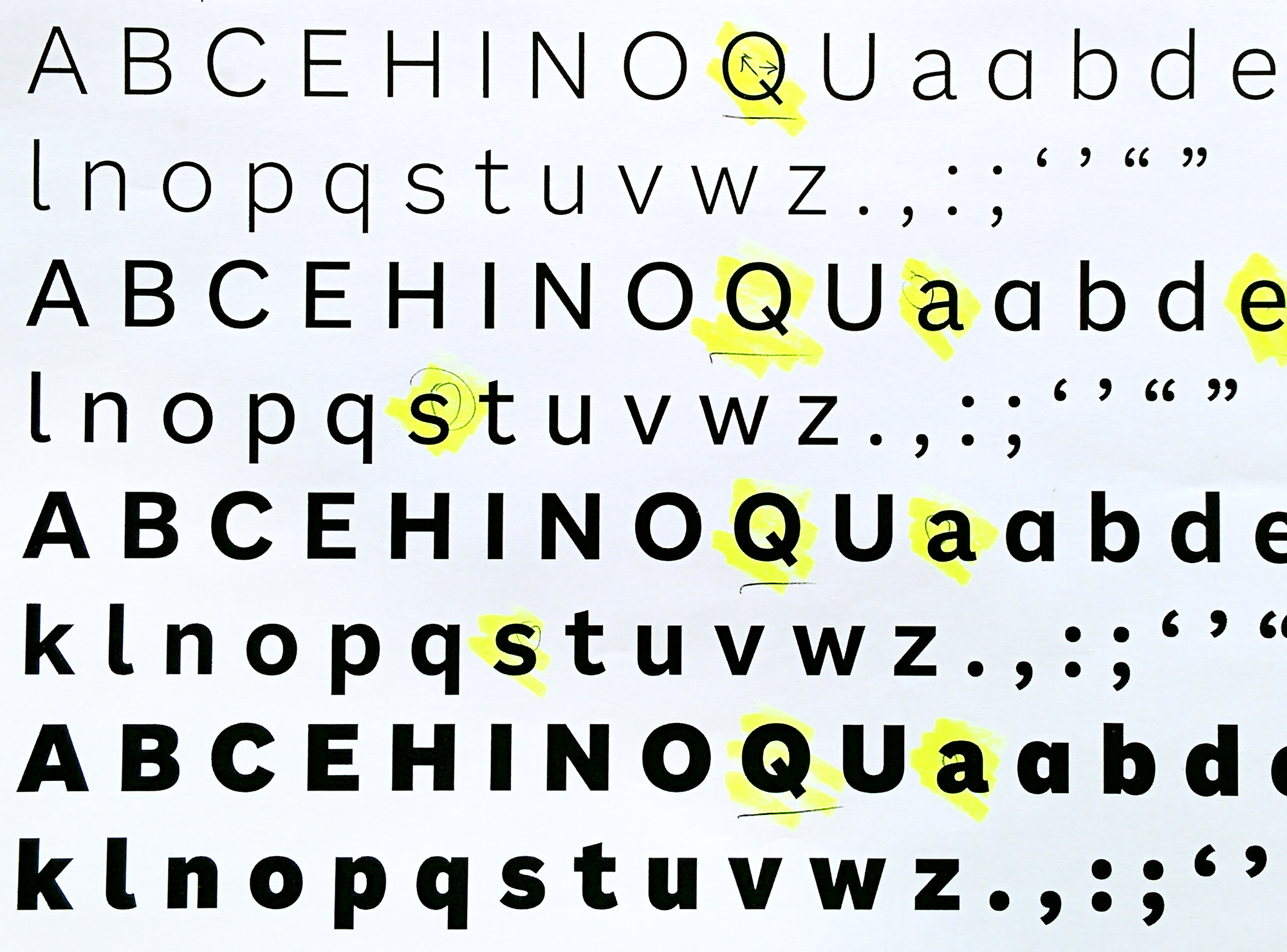 Once the selection was narrowed down, Dalton Maag worked on developing concepts further, creating additional characters as well as basic punctuation and refining proportions through designing combinations of upper and lowercase letters.

“We build out the concept of the type family … and then the next step is to select one particular design concept and go into concept refinement, where we expand it further, and refine weights, and share it with the client for extensive testing,” says Paltram. “Even in the concept phase, the client has to be able to use [the typeface] in different materials and and give feedback. You want to make refinements and smaller changes before you lock in the concept, because once you’ve locked it in you have to branch out in lots of different directions.”

Paltram believes this approach helps keep costs down. Testing concepts at an early stage allows Dalton Maag to resolve design issues at an early stage and gives the foundry a better idea of what the development process will look like once the concept has been selected. It also reduces the risk of complications further down the line.

Dalton Maag tested designs on a range of digital screens during the development process – “it’s impossible to look at a design on every single digital device that is out there or every single app, but you can look at the extreme situations, [for example], different rendering systems, different operating systems, varying screen sizes,” says Paltram. Designs were also tested in a range of lighting conditions: under bright and dim light, artificial and natural lighting and with light coming from different directions. 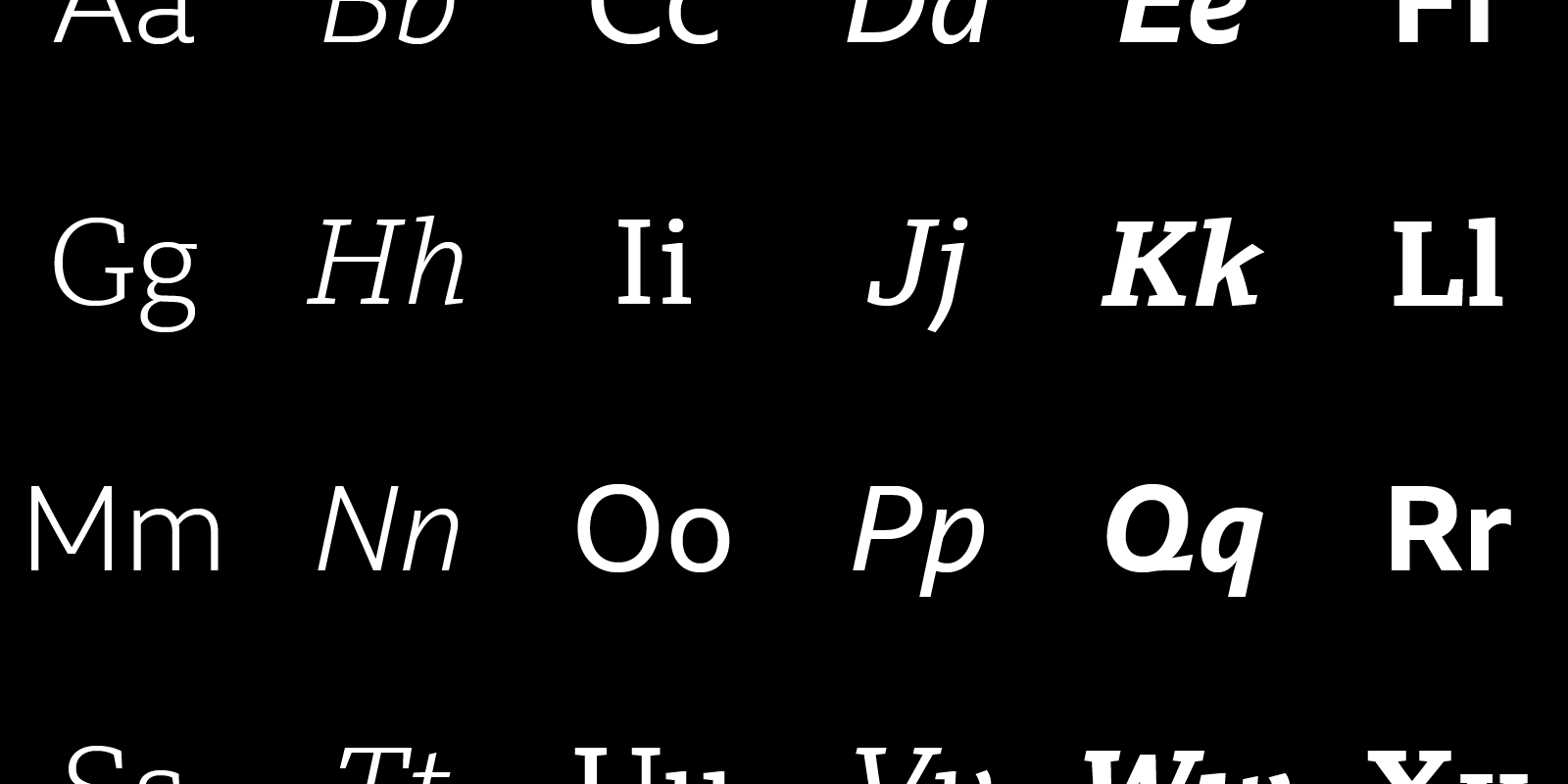 Dalton Maag developed sans and serif versions at the same time. Paltram says this is a rare opportunity when working on custom fonts but one that allowed the team to compare and cross-reference designs throughout the development process and ensure the two styles complemented each other. A condensed version was also created and is also designed to be legible even at very small sizes.

Creating an extensive family with multiple styles and weights gives the BBC a flexible type family that can be used to communicate both serious and more light-hearted content to a diverse audience – from children to teens and older adults. A sans version might be more suitable for BBC Sport while a serif font can be used for a long read or a hard-hitting news piece.

“The range of options you get from that family is a big benefit. You can adapt the expression to the content but you don’t lose that consistency with the general expression and stylistic direction,” says Paltram. 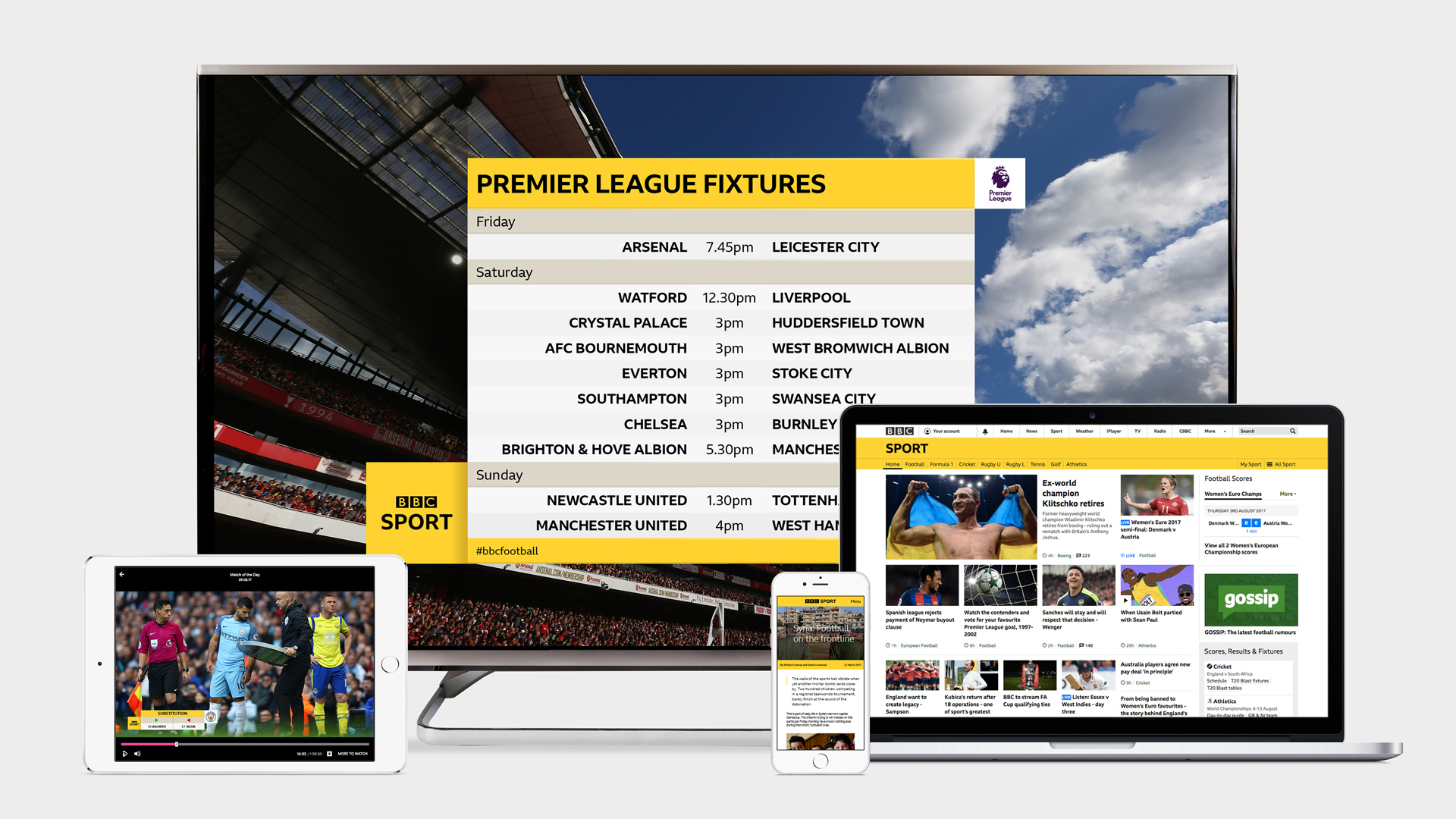 BBC Reith in use on the BBC Sport website. BBC recently underwent a brand refresh carried out by BBC Creative and Studio Output. Image: Studio Output

Paltram says working with the BBC has been an important learning experience. He praises the care taken by the organisation to ensure the new typeface was well considered, well informed and created with the involvement of the right stakeholders.

“It wasn’t the fastest process we’ve ever gone through, but I think it was exactly the right way to approach that project…. Sometimes, you can get scared if you have a group of close to 20 people, and together you have to come up with a decision, and you think it’s going to be difficult, but [the BBC] are used to working in that way, and are very aware of the fact that it’s important to listen to other people’s opinions, and I think it produced a great result. A lot of the discussions were had up front … and it was a confident design that came out in the end, so that [collaborative process] definitely made a big difference,” he says.

When to invest in a bespoke typeface

Not every brand will want to invest in a custom typeface but for large corporations like the BBC that reach a large audience (and have struggled to find a single font that could meet all of its needs), it can save money in the long-run, removing the cost of licensing fees.

“It’s often cheaper in the long term to invest in something that can be owned by an organisation and that was definitely the case with the BBC … but [the need for a custom typeface] really depends on the client,” says Paltram. 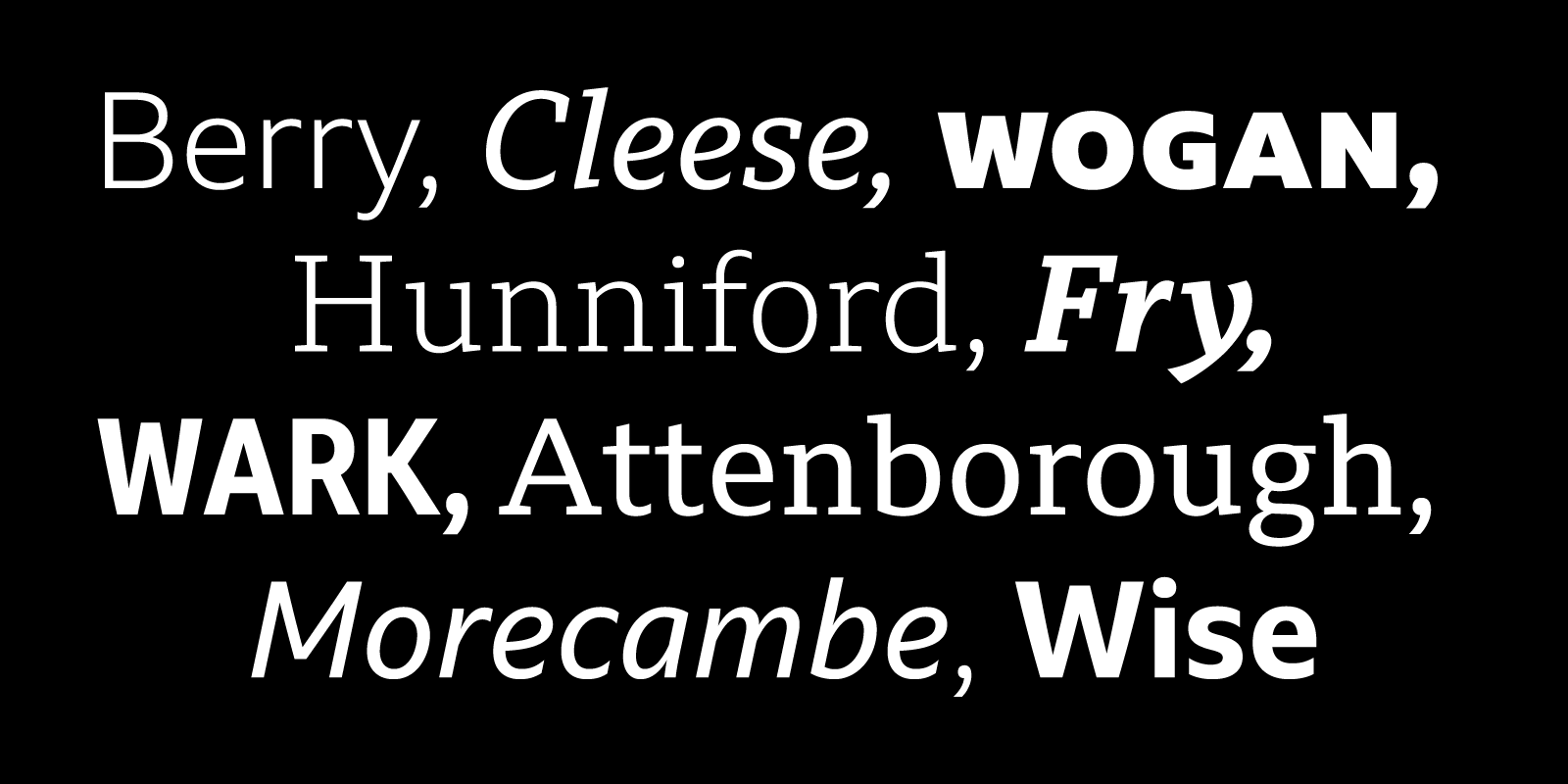 A bespoke design isn’t always the best option – as Paltram points out there are hundreds of thousands of existing typefaces and it’s not always necessary to create something from scratch.

“It would be wrong to say that every organisation should have their own design because it might be more economic for certain organisations to work with a family of fonts they license,” adds Paltram.

Paltram recommends looking at existing typefaces first but says it is important to consider both functionality and aesthetics.

“[Clients should ask] Can I find the right font that allows me to communicate in the way that I want to communicate and express my particular voice?… If that exists, the next question is functionality,” he explains.

“Often a font works perfectly for some situations or a particular platform but not others. It doesn’t really help an organisation to select a font that looks great but fails on certain levels – whether it’s language coverage, glyph coverage, or the fact that it’s not optimised for usage on screen or doesn’t have the stylistic variation they need.” 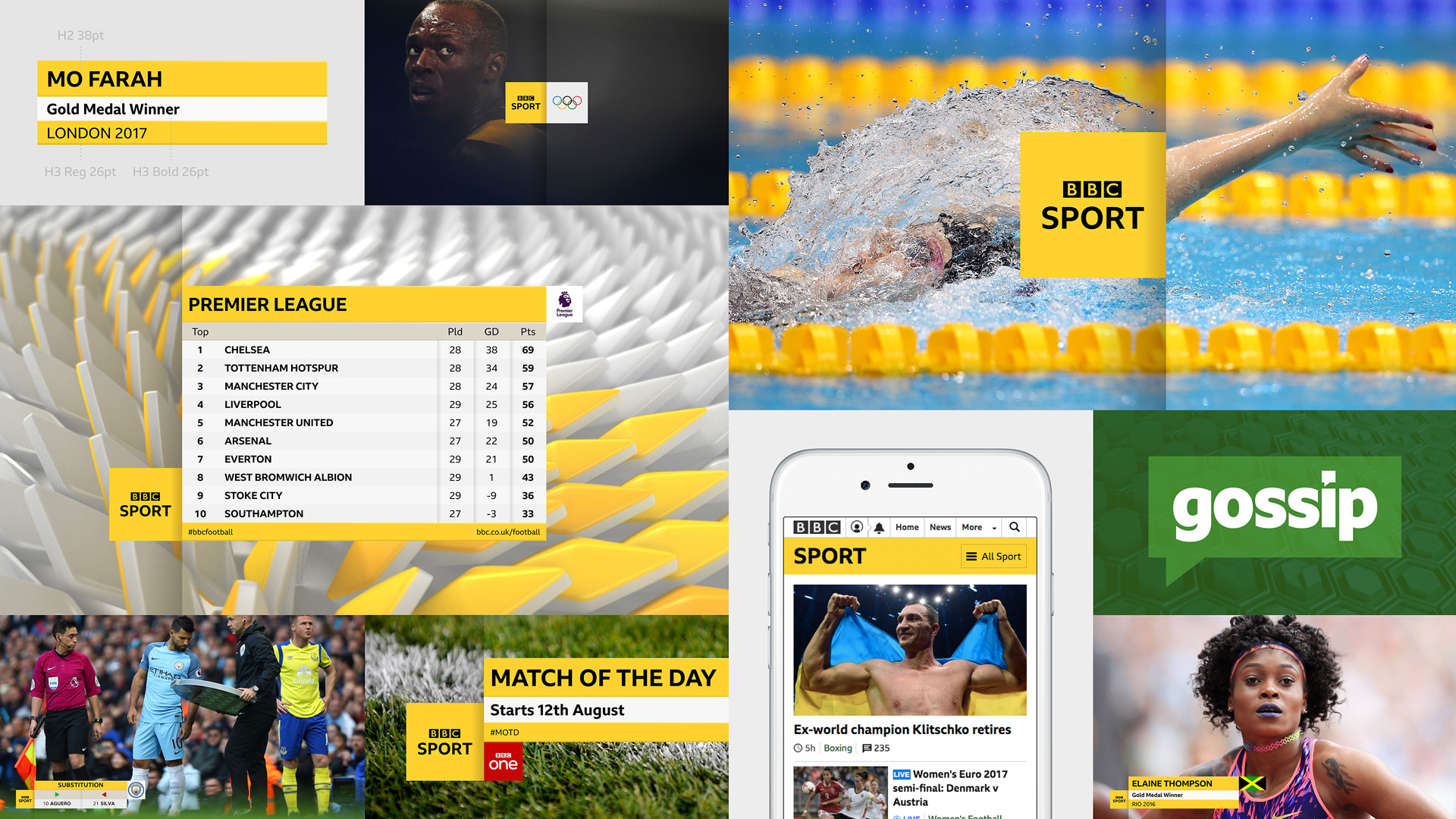 Clients should also consider licensing options which vary depending on foundries and for anyone thinking of investing in a custom typeface, Paltram believes it is important to consider how long you intend to use a font for. Reith is a long-term investment for the BBC and one that the organisation plans to use for years to come.

“What we see happening more and more is that some organisations use fonts for a more limited amount of time, maybe where the timespan of an identity is shorter, and that’s fine – but certainly with a corporation like the BBC, they were looking for a long-term solution. They’re not going to replace this in a couple of years – they wanted to invest in something that really lasts.”